It’s been so great to have time speaking out my thoughts about my blog with you all… As this is my 101st post I take this opportunity in sharing few of my experiences…:) Though you might be busy out there with your own world of joys and sorrows guess I would lend a 15mins of your valuable time in reading this post…:) 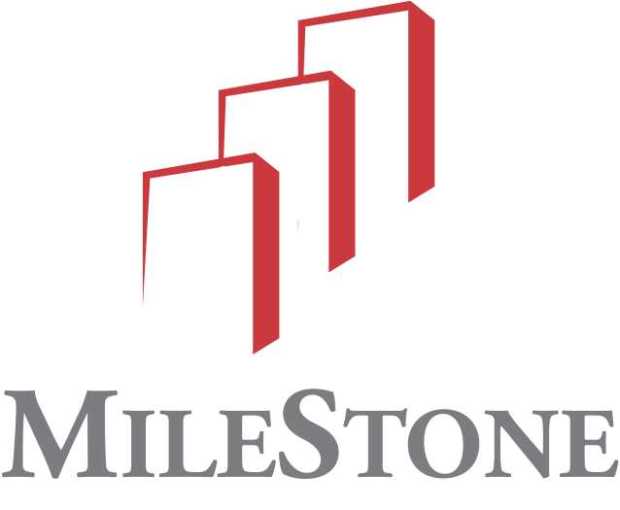 So I am a girl of 23, working as a Content Writer (Of course I am, do believe me 😛 ) in an IT concern. While I was doing my graduation I had my personal laptop with net connection. All I could do with it was to search content for my assignments, create various profiles in social networking sites for chit-chatting, mail my buddies and watch movies online. I never knew there could be a better world out there that offers me so much of opportunities in identifying and developing my inborn skills which is kept untouched. 😦

But it was at the end of my graduation I accidently came across a blog which I don’t even remember by now and I found that a guy was penning down his thoughts in such a funny way which I just loved it. I kept it bookmarked and followed him for so many days. But I was such an idiot (even now am so at times 😛 ) for not even taking a chance in browsing over what the blogging platform is and how it works. I must say that am not much interested those days.

But after my graduation I had several mess ups in my personal and professional life and finally landed up with bits and pieces of me into this office which is a haven. I haven’t dreamt of even finding a place to work with such pleasant atmosphere and lots of good people out there with loads of experience helping me out with each of my endeavor holding back with massive patience :D. I know I was a quiver and I don’t understand a thing simple. I need an explanation for each and every little thing which is quiet a good habit according to me as I got to know a number of unknown facts about the work and even the usage of every single software ( though my superiors might have got irritated with me am so thankful to them). 🙂 🙂

After few months of my work with my so-called-perfect-company, I had to write various contents for variety of business profiles which made me surf over the internet once again. While doing so I again came up with so much of blogs which was so amazing and lovely to be with. So during my free hours I started searching for blogs and got addicted in reading blogs. 😀

I am a single girl child and I am yearning badly to share my views and thoughts with someone. And I found that blogging could make me feel better in sharing what I have in my mind. The main reasons behind this thought are:

So analyzing and coming for a conclusion about me blogging I created a blog. But to my disappointment I was not able to continue as I do not have time to spend for my blog in my office and at home I had a problem with my net connection. So my first blog cannot be updated regularly and by due course of time I even forgot that I owned a blog. 😦

Finally at the end of September 2011 I thought of creating a new blog in a new name where I had to update often and keep my blog alive without any degradation for my readers. So thus I created atinytoes.wordpress.com in the beginning of august 2011. 🙂 🙂 🙂 Though I do not have a perfect genre for my blog I actually wanted to explore my writing, photographing and crafting skills with everyone. But I do accept that my blog doesn’t have much information’s that is helpful for you all. But I am trying my best to implement new ideas in writing my posts which might create an interest over the readers to spend some time to stay in my blog page. 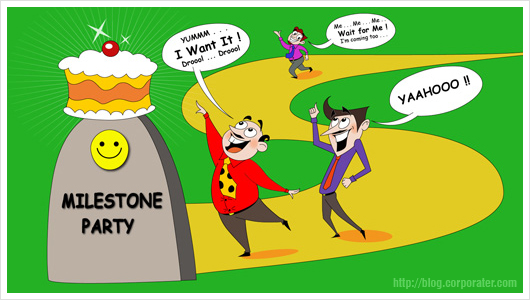 Here is the status of atinytoes in the WordPress:

When I started writing my blog I never really imagined that I can make up to this type of result within a 6month time period. But when I find this kind of support from my fellow bloggers I am pleased and get motivated to give more useful posts to everyone.

I take this opportunity to Thank you all my friends, visitors and my blogs future visitors for considering me and my blog page for few minutes from your precious time.

Its atinytoes thanking each and every single person out there reading my blog, visiting my blog often, and also for the one’s who just cross over my blog… Thank you so much! 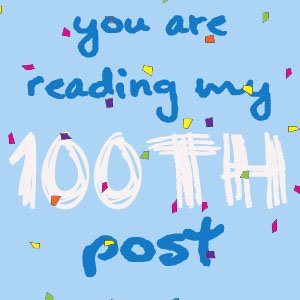 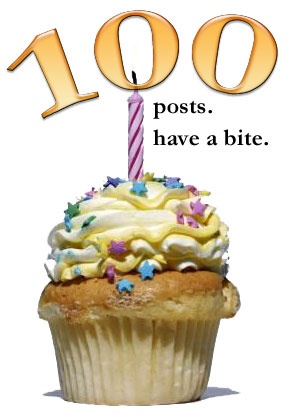 For my 100th post and for my Mother India celebrating her 63rd Republic day, here’s the poem for her.

When the sun comes ,nature smiles
when the moon comes, darkness cries
But at happy and sorrow ,at misery and grievence you are their mother following like the shadow all the way looking after me till the grave
the beauty of my mother land is none compared to anyother land
the purity of your love is more precious than sacred amruta
the kindness of your heart cannot be expressed as the universe is vast
GOD should hate ,having created you so great
the diamond that shines becomes lazy before your eyes
But today the glogy of my mother ,becoming prey for other
everyone have their way,vampires have their sway
none to see your welfare,everywhere became warfare
BUT………………MOTHER……….. my eyes ,search for you
my mind thinks of you
and my heart ,beats for you ………….. forever……………forever…..

To mark the importance of the occasion, every year a grand parade is held in the capital, New Delhi, from the Raisina Hill near the Rashtrapati Bhavan (President’s Palace), along the Rajpath, past India Gate . Prior to its commencement, the Prime Minister lays a floral wreath at the Amar Jawan Jyoti, a memorial to unknown soldiers at the India Gate at one end of Rajpath, which is followed by two minutes silence in the memory of unknown soldiers. Thereafter he/she reaches the main dais at Rajpath to join other dignitaries, subsequently the President arrives along with the chief guest of the occasion. First he unfurls the National flag, as the National Anthem is played, and a 21-gun salute is given. Next, important awards like the Ashok Chakra and Kirti Chakra are given away by the President, before the regiments of Armed Forces start their march past.

The different regiments of the Indian Army, Navy, and Air Force march past in all their finery and official decorations. The President of India who is the Commander-in-Chief of the Indian Armed Forces, takes the salute. Floats exhibiting the cultures of the various states and regions of India are in the grand parade, which is broadcast nationwide on television and radio. Also part of the parade are children who win the National Bravery Award for the year. The parade also includes other vibrant displays and floats and traditionally ends with a flypast by the Indian Air Force jets.

Today, the Republic Day is celebrated with much enthusiasm all over the country and especially in the capital, New Delhi where the celebrations start with the Presidential address to the nation. The beginning of the occasion is always a solemn reminder of the sacrifice of the martyrs who died for the country in the freedom movement and the succeeding wars for the defence of sovereignty of their country. Then, the President comes forward to award the medals of bravery to the people from the armed forces for their exceptional courage in the field and also the civilians, who have distinguished themselves by their different acts of valour in different situations.

To mark the importance of this occasion, every year a grand parade is held in the capital, from the Rajghat, along the Vijaypath. The different regiments of the army, the Navy and the Air force march past in all their finery and official decorations even the horses of the cavalry are attractively caparisoned to suit the occasion. The crème of N. C. C. cadets, selected from all over the country consider it an honour to participate in this event, as do the school children from various schools in the capital. They spend many days preparing for the event and no expense is spared to see that every detail is taken care of, from their practice for the drills, the essential props and their uniforms.

The parade is followed by a pageant of spectacular displays from the different states of the country. These moving exhibits depict scenes of activities of people in those states and the music and songs of that particular state accompany each display. Each display brings out the diversity and richness of the culture of India and the whole show lends a festive air to the occasion. The parade and the ensuing pageantry is telecast by the National Television and is watched by millions of viewers in every corner of the country.

The patriotic fervor of the people on this day brings the whole country together even in her essential diversity. Every part of the country is represented in occasion, which makes the Republic Day the most popular of all the national holidays of India. 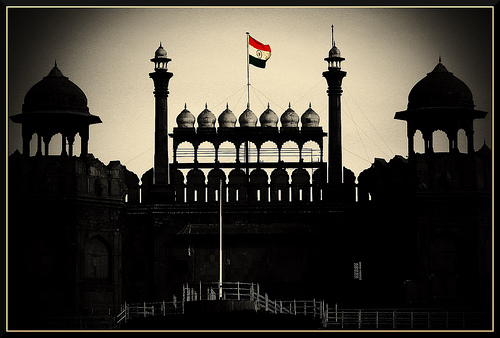 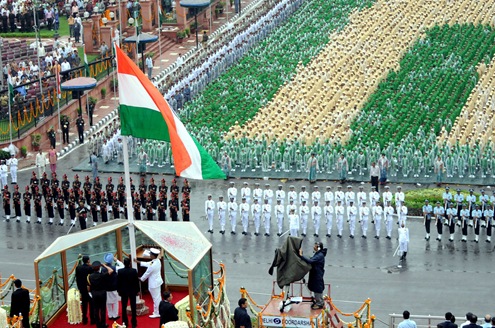 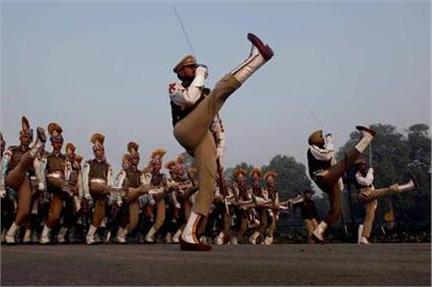 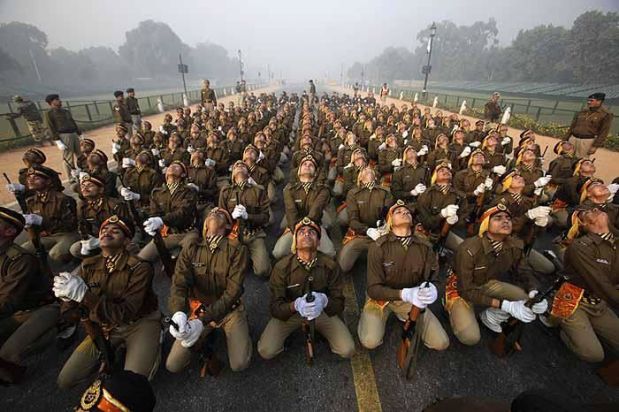 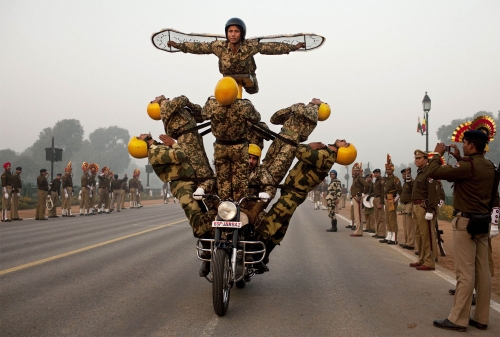 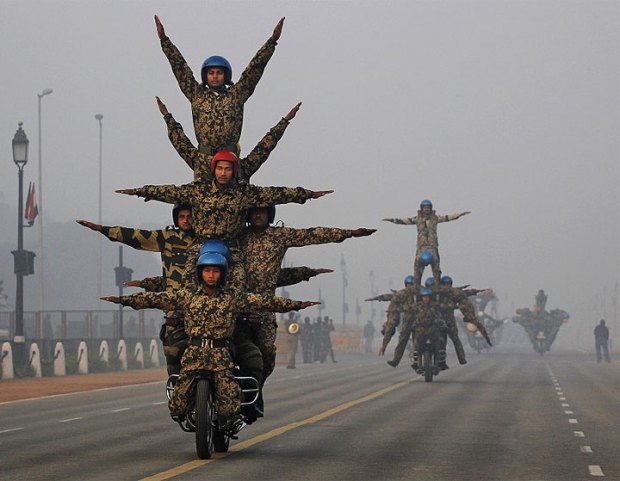 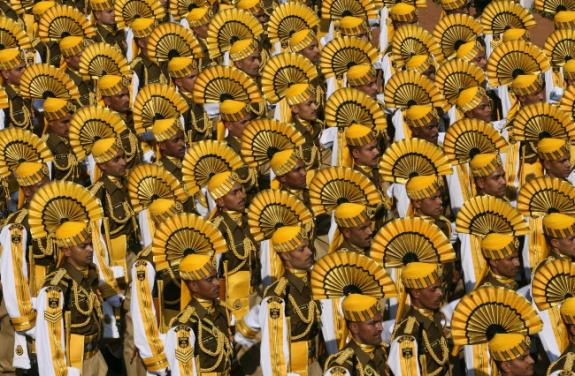 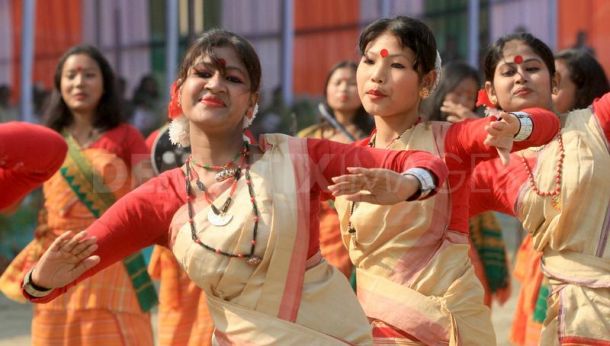 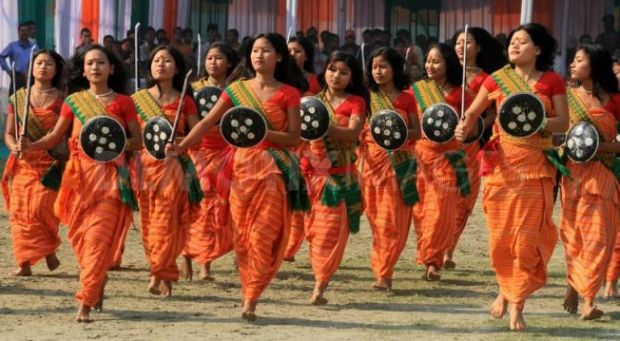 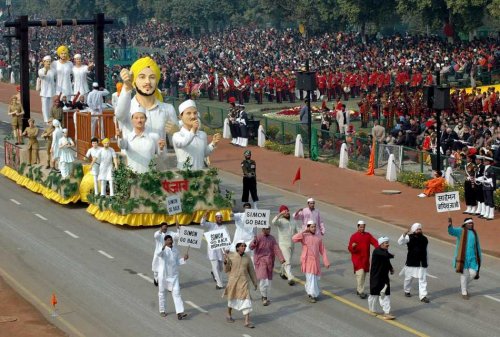 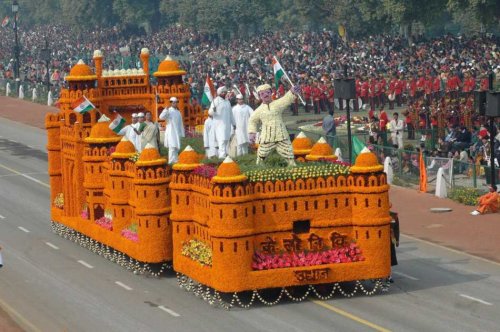 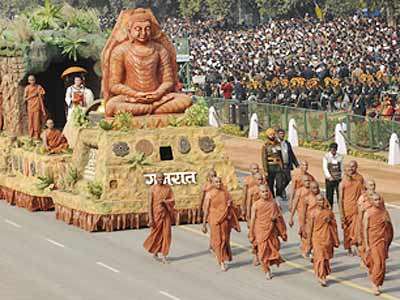 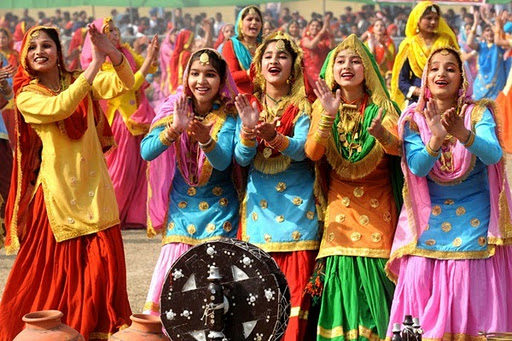 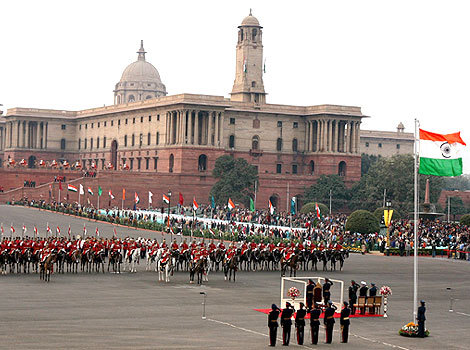 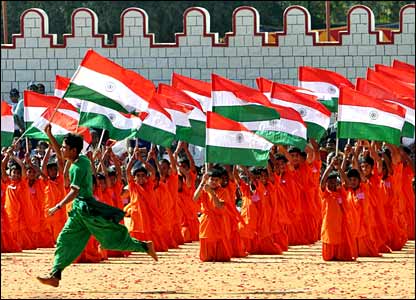 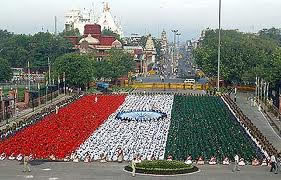 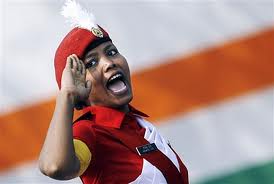 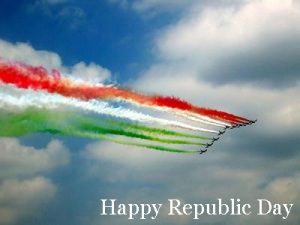 Happy Republic Day wishes to all Indians from atinytoes! 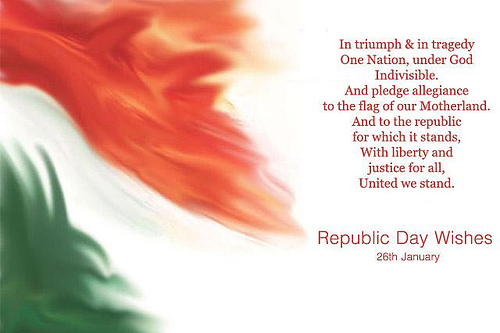 Republic Day, celebrated on January 26th every year, is one of India’s most important national events. It was on January 26th, 1950 that the constitution of India came into force and India became a truly Sovereign, Democratic and Republic state.

On this day India finally enjoyed the freedom of spirit, rule of law and fundamental principle of governance. The patriotic fervor of the Indian people on this day brings the whole country together even in her embedded diversity.

Republic Day is a people’s day in a variety of ways:

It’s when regional identity takes a backseat and what matters most is the universal appeal of unity andbrotherhood projected by all Indians.

The Indian constitution basically stands for the aspirations which ‘the common man of India’ cherishes.

Republic Day is a day of the citizen of the country when he is entitled to be ‘all supreme’.

Republic Day is celebrated most majestically in the capital, New Delhi, where symbols of the great nation’smilitary might and cultural wealth are displayed in what is the world’s most impressive parade. All Government buildings are illuminated lending the city the atmosphere of a fairyland. This day is celebrated with much zeal and pride all across the nation.

Its atinytoes wishing you all a happy and prosperous Pongal 🙂 🙂 🙂 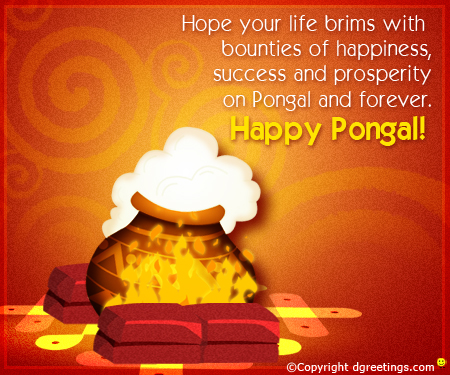